In addition to a lack of knowledge on the part of humans, many animals are misunderstood or maligned without reason due to myths and misinformation. One animal that has received a bum rap is the bat. In fact, along with hyenas, they are probably the most maligned and misunderstood animals in the world. Considered by many to be nothing but rabies carriers, or scary creatures of the night that will tangle in your hair (pleeeease, that is a myth), the general public is not aware of just how beneficial these animals really are to our ecosystems, our economies and our health. We hope to dispel some of the myths here and guide you into looking upon bats a little more kindly. Even if you do not grow to love bats (as we do), there are very good reasons to respect them.

Bats can be found all over the world, except for polar regions. They belong to the order Chiroptera, the second largest order of mammals in the world (rodents being the largest). Over 20% of mammals worldwide are bats and they are the only mammals that are capable of true powered flight over sustained distances. Other “flying” mammals, such as the flying squirrel do not actually fly, they simply glide. Bats range in size from the larger megabats which include the flying fox, found in Indonesia, with a six foot wing span (and weighing over 2 pounds) to the small microbats such as the diminutive Kitti’s hog-nosed bat, weighing a mere 2 grams and measuring up to 1.3” in length.

Up to 70% of bat species are insectivores, while the remaining species feast on a diverse diet that includes nectar, pollen, small fish and mammals, fruit and in the case of the well-known vampire bat, the blood of mammals (just as aside, vampires do not suck blood. They lap it up. Doesn’t that sound much more refined to the squeamish?).

Bats are in deep trouble. In addition to other threats, they are dying at an alarming rate from an insidious disease called White Nosed Syndrome, which has killed millions of bats in the eastern United States and is spreading westward, they are facing one of the most accelerated and dire wildlife crises in the past 100 years. It is time that people understood just how beneficial bats are to us and just how devastating it would be should we lose them.

Why Bats Are So Important

What are some causes to the decline of bat populations? What can be done?

Since 2006 an estimated 6.7 million bats have perished from White-Nosed Syndrome (“WNS”), a fungus that appears to have been introduced to North America from Europe (interestingly, bats in Europe seem to have developed an immunity to the disease). Discovered in New York in 2006, this epidemic is considered the worst outbreak of any type of wildlife disease in North American history and it has left entire colonies completely wiped out. In hibernating bats WNS affects the skin of bats, including the wings, causing them to wake up frequently during the winter, eating up precious fat reserves and energy. These bats often have white fuzz around their muzzles, giving the fungus its name. Sadly, 70 to 90% of bats (and in some cases 100%) in an affected hibernation area will be killed once WNS invades their sanctuary. To date, scientists, biologists and universities are seeking out the means to control this deadly disease as it spreads westward. 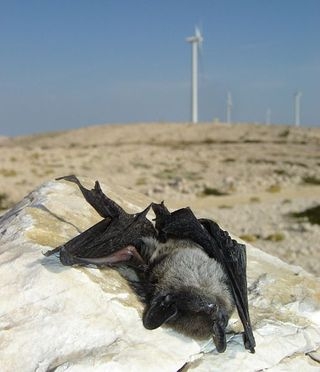 Another threat facing bats are wind turbines. Many people have heard of the threat to birds from these structures, but surprisingly, bats are impacted more often than birds and its estimated that tens of thousands perish each year. While alternative energy is critical to our future, it is just as critical that those planning wind facility sites collaborate with conservation organizations so that wildlife and habitat is not negatively impacted. For the past decade or so, scientists and conservation partners have collaborated on research and studies as they work together to combat this issue.

For more Information, and to find out how you can help bats, check out the links below

What Does the Bat Say: Wonderful video produced by 3rd graders about bats!